Oh boy. Another one on the books. I want to get this done now because i have a busy month coming up next month and i don't know what kind of free time i will have. We are moving houses again and have a lot to do in a compressed time frame. It's like i'm being punished for some injustice i committed in the past and skirted the consequences. The closest i've ever been to being arrested was one time when i was probably 13 or 14 i squirted water at a girl through her house window and the water got on a leather recliner and her mom called the cops to come talk to me. He sat me in his car and explained that they weren't pressing charges but that they could if they wanted to and that i was very lucky that i wasn't going to be arrested. It was a really really really toned down version of Scared Straight. But since then i've done plenty of other bad things that i was never properly punished for. So maybe this crazy moving/renovating schedule is the universe getting even with me, which is also likely why i am reviewing THIS root beer specifically. Gold Mine Root Beer is another of the many iterations of bad root beers Rocket Fizz has been brewing up,  slapping a silly name or theme on, and putting out on shelves for dummies like me to pick up. Side note; I've gotten bad at saving my opinion for after my extremely thorough assessment and tend to just blurt out what i think of it cuz i can't be bothered to build any kind of suspense or intrigue or climactic story framework before the big finale. So just to make sure i'm completely clear on this, i don't like this root beer. It feels like a punishment to drink and review.

This stuff comes in an oversized 22 oz. brown glass bottle. It has a very flashy and shiny label depicting a prospector in a mine standing next to a cart. This little guy is probably the inspiration for the prospector in The Ballad of Buster Scruggs. Looks identical, right? I really enjoyed that show, all of the little stories. The last one in the stage coach was probably my least favorite. And my most favorite was the traveling showman with Liam Neeson. Man, that one was brutal. Funny how my least favorite had the most talking and my most favorite had probably the least talking. But i really liked the prospector one as well. Those Coen Brother really put out some great stuff don't they? Don't you wish we could just sit and talk about something good like the Coen Brothers and their great movies? Me too. But i have to talk about a bad root beer instead. 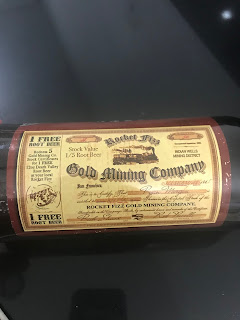 So they are already not skimping and doing some good work on the label, but to add some mystique to the whole theme of this root beer there is a large portion of the label dedicated to handing out a "Gold Mining Company certificate" which when 5 are collected a Death Valley Root Beer (another sub-par root beer) can be redeemed. And to add more to the packaging, they do the thing Indian Wells does and pour "wax" (not really wax) over the cap and stamp it with the Rocket Fizz logo. But this is a lesson each of us should learn about flashy packaging. It's the little things, the details, that matter. While i will whole heartedly admit this oversize bottle and flashy label and poured wax cap (not really wax) stamped with the company logo paints a picture of a luxurious root beer experience waiting for the person who indulges and decides to treat themselves, the real story is plain as day when you peel that waxy finish (not really wax) off the cap. Underneath, they used a bottle cap for a completely separate root beer. 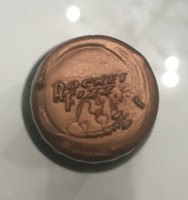 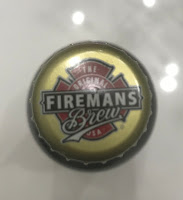 These guys only appear to not be skimping, but they are skimping. It would have been better to have a blank cap under that not really wax, because this tips their hand to tell you that this root beer is not as advertised. It's not luxurious. It's not rugged. It doesn't embody the prospector spirit of the 1840s and 50s. It's a fraud. A fake. It's fool's gold, plain and simple. This stuff doesn't even taste like anything. It's super watered down and lacks all flavor. Any flavor it may have fades so quickly that it's practically indiscernible. Sweetened with cane sugar, this doesn't even have the decency to be sweet tasting. It just tastes like nothing and leaves a really bad aftertaste in your mouth to boot. I reject you Gold Mine and all that you stand for. You bring shame upon Joel and Ethan Coen, but even more, you bring shame upon yourself.

My official review is that Gold Mine Root Beer gets 2 (two) IBCs. I really didn't enjoy this. The only pleasure i derived was knowing i have this complete and i can move on to other more deserving root beers. And a score of 2 is pretty harsh i know, but this stuff so fully rubbed me the wrong way tonight that i stand by it. It was an unpleasant experience from start to finish. Also, my kids thought it was pretty good. Just thought i would throw that in there.