I am doing this one out of order. It's actually the most recent root beer i have tried, but i still need to write a review for one i drank back in February. Luckily i have a spare one of those in the fridge, but this one was... special? Not really, but it is from half way around the world. My wife and i had the privilege of leaving our two awful (-ly lovely) children with her sister and took a trip out to the island of Cebu in the Philippines to meet up with some friends of ours. The Philippines is a beautiful country and it was an amazing trip. The islands are very distinct and all offer unique experiences and the people are some of the warmest, nicest, most hospitable people i've ever encountered. And as a bonus, every thing is written in English and everyone speaks it to a reasonable degree. We had no trouble getting around. I keep saying the Philippines has everything to offer that Hawaii has at a fraction of the price. I'd definitely recommend visiting if you have the means. We went to a little town on the southeastern coast of Cebu called Oslob to swim with whale sharks in the beautiful crystal blue water. That's where i happened to stumble upon Arcy's Root Beer. The website says this is a distinctly Filipino company (so it's called the Philippines in honor of Prince/King Philip or whatever, but i have no idea why when you talk about the people you spell it Filipino). They have a license to distribute the American brand RC cola in both regular and diet formula, but then i think the rest of their products are in-house brands. So the name Arcy's seems a little plaguristic to me, but apparently they are able to get away with it.

I found a 500ml plastic bottle of this root beer at a 7-eleven gas station along with several local candy bars with vaguely sexual names. 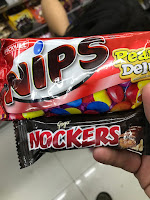 The label is very unappealing and unimaginative. It's almost the bare minimum of what needs to be on the label. They use the traditional color scheme of browns and yellows along with some sort of font that is straight out of Saved by the Bell or something, minus the vivid colors of course. I feel like with all the time they saved ripping off a name they could have done much better on the label. Oh well.

This isn't a bad tasting root beer. The first thing I noticed when I cracked it open was that it has a nice aroma to it, very root beer in nature. And the taste wasn't far behind. It's basically a standard root beer flavor with a bit of a spicy aftertaste. On the downside it had very little carbonation (nearly flat), but from our experience that was typical of most sodas we drank in the Philippines (which really wasn't that many). I am sure the Filipino recipe for Arcy's borrowed heavily from the standard American flavor, and maybe even from another root beer under the RC umbrella. Side note: we also found Zest-o brand root beer in several of the local grocery stores, but I had already tried that brand when I went to Dubai and from what I recall I wasn't all that impressed with it.

My official review is that Arcy's Root Beer gets 5 (five) IBCs. It was fun to find something all the way on the other side of the world, but when it comes down to taste this root beer is no better than your average American brand. I love to travel and I love root beer and I love to mix the two when I can, so this was a win in my books. I would absolutely love to go back to the Philippines and discover more of that beautiful country, but I won't be making a special trip just to drink this again. However, if you find yourself over there go ahead and give this one a whirl.
Posted by My name is Cosmo at 10:13 PM No comments: