i hate to break it to you folks, but i am quickly running out of options. i am always on the lookout for new root beers to review, and i appreciate those of you who have offered suggestions. I will keep doing my best to bring you my reliable and honest opinion since you are desperately in need of it. It might be a bit slow for a while though. i don't have very many prospects on the horizon, as even mail ordering new brews is becoming harder for me. Anyway, enough of that. You came here for info on root beer, so let's get down to it. This root beer is called Red Ribbon Root Beer. It has been around since 1904 and hails from Natrona, PA. The name of the company is even Natrona Bottling. The website history section tells of a small company managed by the owner for several decades. I get the feeling they are struggling in their effort to fight the Coca-Cola and Pepsi companies of the world. But they seem to have pride in their work, and i suppose that's gotta be worth something. I think this needs to be brought up though... 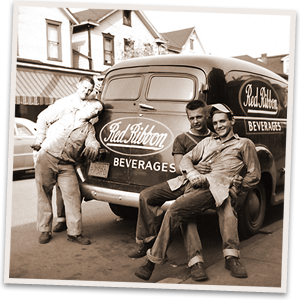 this picture is featured on their website, presumably from the days when the company was bought by it's current owner's brother in 1939. I don't know who the two men in the photo are, but all i can say is... it looks a little gay. Now, i don't have any problems with gay people, and to be as publicly open as these two were back then takes guts. Gays didn't exactly get preferential treatment back then. Maybe that's where the company gets all it's pride.

The bottle is simple, and so is the label, but i don't blame 'em. They are a small and presumably struggling company, so they gotta make this stuff on the cheap in order to make a profit. It's a simple clear glass bottle, and the label isn't anything fancy. Just the name of the root beer, a few different font types used, some pictures of root beer mugs, etc. Mind you, it at least has more imagination than Olde Rhode Island Root Beer. But suffice it to say, it covers the basics and that's all that needs to be done. No big deal, really.

The list of ingredients on the label are just a simple as the label itself. The root beer isn't bad. But just as the ingredients suggest, there isn't much to it. This root beer is sweetened with sugar instead of HFCS, and the taste reflects that. But even the root beer flavor itself is kind of weak. It's in there, but it's very subtle. At least this root beer isn't flat like most i have had from a clear glass bottle. So it deserves at least some credit for not falling into too much of the cliche.

My official review is that Red Ribbon gets 5 (five) IBCs. It's not a root beer i'd go out of my way for, but i feel like small companies like this deserve a break. So if you're in an area where this stuff is served and you'd like to give it a shot, i say what the heck. It's not like this stuff is gonna turn you gay, right?