This is another root beer i ordered from the Soda Emporium. Bedford's Root Beer comes from Port Angeles, WA and has been around since 1984. I know this because it says so right on the label. The root beer is currently distributed through Orca Beverages, same as Red Arrow Root Beer. Little else is known by me about this root beer, but the name Bedford's is a little generic. There are tons of things that come up in Google when you enter Bedford's... a roofing service, a town in England, several inns/motels in various locations, and even some weird oceanic creature called a flatworm, which is just one more reason i hate everything in the ocean. But finding more info on the root beer named Bedford's was more difficult for me than all these other (un)interesting topics sharing the same name. For the most part though, i got what i wanted straight from the bottle.

This root beer comes in a classic (i've taken to calling it classic now, cuz i'm fancy) 12 oz amber glass bottle. The label isn't over the top amazing, but it is eye-catching. The big letter B in the center swirled in what appear to be some kind of vines or something draws your attention away from the fact that this is probably the only root beer i've seen where the name "Bedford's" is actually below the words "Root Beer". So reading in the traditional Western practice of left to right, top to bottom, it reads Root Beer Bedford's. A little clunky for my liking, but it's all about what you're used to i suppose. For example, here in America we would call the longest river in the country the Mississippi River. In contrast, over lovely friends over in England call the river dividing the city of London the River Thames. Neither is wrong, just a different way of saying it i suppose. I suspect it's part upbringing and part preference. But just between you and me, those people over in England are saying it wrong.

This stuff isn't half bad. It's quite sweet (made with pure cane sugar) and has a faint molasses taste to it, but it's not unpleasant. It has a good root beer flavor and decent carbonation. The flavor does fade fairly quickly though, and it leaves a bit of a bad taste in my mouth (literally, not figuratively). But for the most part, it's a decent root beer. Much better than Red Arrow, which is distributed by the same company.

My official review is that Bedford's gets 6 (six) IBCs. It's a good root beer. Not my first choice, but good. Really not much else to say about it, so... yeah. Lets just leave it at that.
Posted by My name is Cosmo at 7:51 AM 1 comment:

Here is another root beer i got from the Soda Emporium site. Tower Root Beer has a lot of history attached to it. It comes from Somerville, MA and has been serving the Boston area since 1914. The site has a big write up on the history of the family run company, complete with some cool black and white pics from way back. The company that produced Tower Root Beer was called Prospect Hill Beverages, LLC which was a location where a tower stood atop a small hill for which the root beer is named. It was started by three brothers (i assume they are brothers, although it never really specifies) from Italy named Domenick, Giuseppe and Felice Cusolito. 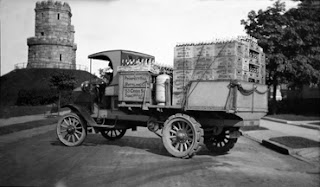 Very Italian mob boss sounding names. During the years of prohibition, the company thrived and expanded to service much of New England throughout the Depression and into the 1960's. In 1969 the company was sold to a conglomerate and a franchise was run by Domenick's son Richard until 1978, at which time Tower went off the market. Then in the late 90's, Domenick's grandson Larry found the old recipe and brought the root beer back into production. All this can be seen on the website. Kind of a neat story i guess.

This root beer came in a stout brown 12 oz glass bottle, but the website tells of a time that the root beer was bottled in clear bottles until the acquisition of several 7 oz amber bottles from a beer brewery that was shut down during Prohibition. Ever since then, the brown glass bottles were used. I like the label. It has the old timey look of something you'd find in a pharmacy or apothecary. The font and colors selected are classically in line with the way it has always been made. The small circular depiction of the tower in the center includes the words "better than the best". While i admire the brash show of confidence, it has already been established that nothing can be better than IBC. Nothing gets 10 IBCs except IBC. Sorry Tower, you're just wrong on that one.

Keeping true to the old recipe, Tower is sweetened with pure cane sugar. But the ingredients on the label don't give any other indication to the flavor of the root beer. I think it has a very subtle molasses base which thankfully is not overpowering. But aside from that and the cane sugar i can't say i really get a root beer taste from it. That doesn't make it bad. In fact, i find myself enjoying this stuff quite a bit and perhaps without justified reason because i can't really defend it. I just like it. It's not amazing, but i wouldn't mind having another any time soon.

My official review is that Tower gets 6 (six) IBCs. I teetered on giving this one a 7, but i don't think it's quite deserving of that high a rating. But it's enjoyable, satisfying, has good carbonation and a pleasant taste, and therefore is easily deserving of a 6. Well done Tower. And welcome back.
Posted by My name is Cosmo at 11:26 AM No comments: