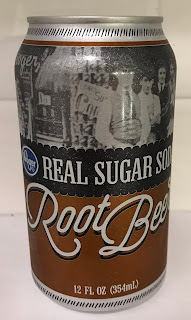 Happy New Year everyone! It has been a little bit since i've posted but there is a lot going on. Don't need to go into it, but it's good to be back in the root beer reviewing game. We drove up to Utah to spend Christmas with my wife's parents and at a local Smith's grocery store in West Jordan, UT i found this Kroger Real Sugar Root Beer. It's the generic brand of that grocery chain, but i suspect most people are familiar with the Kroger brand of food. They supply dozens of grocery stores nationwide. The Real Sugar Soda line has a number of flavors, root beer being one of them, and should not be confused with Kroger's line of flavored seltzers. I made the mistake of getting these as well and quickly found out it was not what i would consider "good". I will not be reviewing Fizz & Co. Seltzers in root beer flavor. It is decidedly NOT a root beer.

I picked up a 12 pack of 12 oz cans because that was what was available to me. The label follows the traditional generic root beer color scheme of browns and grays with some silver and black in there as well. It's a lot nicer label than a lot of generics though. It has an old timey photo of who i assume is B.H Kroger and his family standing outside one of their grocery stores. For the sake of the story i'm going to say it was their first store with no credible facts to back that up, but it's a likely assumption, especially given that the label has a little blurb about the Kroger's first store being opened back in 1883. The font is big and bold and pretty. Definitely a step up from other generics, which is basically what i said before. Well done Kroger.

As you can guess from the name, this root beer is made with real cane sugar. It's quite sweet, which is a known side affect of using sugar, and has a really nice tone and finish. These words of course mean nothing, but it makes me sound sophisticated and like i know what i'm talking about when i use them. But the reality is this is a pretty good root beer. One of the better generics i've had for sure. The flavor is full and rich, not shallow, and has a nice vanilla finish to it. It really doesn't disappoint. I can't really think of anything negative about it other than it's not very original. But original or not it's still a refreshing drink with a solid root beer taste.

My official review is that Kroger Real Sugar Root Beer gets 7 (seven) IBCs. That's a solid score for any root beer and an exceptional one for a generic root beer. This one really surprised me. It consistently delivers the goods. I don't really have another to say bad about it. Give it a shot wherever you find it. It's probably pretty widely available.
Posted by My name is Cosmo at 7:46 PM No comments: