I got lucky on an errand i was running and stumbled across a new root beer to review. Oogave Root Beer hails from Denver, CO. Although it was created in 2005 by a guy named Esteban Anson, it wasn't bottled and distributed until January of 2009. If you care to read more about the conception and birth of this root beer, you can check out the website. It's not very interesting though (i.e. lack of explosions, saving kittens from burning building, etc.) I was at Whole Foods when i found it, which may give you an inclination as to what kind of root beer this is; the natural kind. I have a brother that lives in Denver now. He moved there from Flagstaff. So basically he just transferred from one hippie haven to another. They have definitely influenced him a lot over the past decade or so. I worry about him.

It comes in a clear glass bottle and the label is a clear sticker with a simple design on it. The name "oogave" is a variation of the word "agave", which is a plant native to the southwest that many of us who live in this region are very familiar with. So the label has a little decal of agave leaves above the oo in oogave, so it looks like a pair of eyes and a spikey haircut. Clever i suppose. Other than that, it's a pretty bland label. All the writing is in white and yellow text, and the rest of the label is just transparent. It's a new root beer in the bottling business though, so maybe the label with mature with time.

Addendum: I was actually just in the Pop Shop 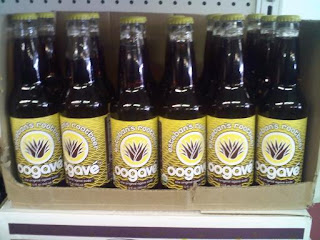 today and saw a case of Oogave with different labels. Much more grown up and sophisticated. Well done Esteban. However, the initial ranking remains the same. Sorry stupid.

I'll just remind you all that i am a fan of very very few natural root beers. This one doesn't quite make the cut either. It's not bad tasting and has moderate carbonation, but it doesn't even really taste like root beer. If i were to relate it to another natural root beer, i would say it's very close in taste to Dr. Tima's, which is heavy on the honey flavor. Although honey is not explicitly listed in the ingredients on the oogave label, the flavor does come across fairly strongly. From the story on the website, Esteban looked to use agave nectar as a replacement for processed sugar or high fructose corn syrup. I think the honey flavor may come from the agave nectar. But anyway, it is a healthier soda option for those of you concerned about that. In fact, it is certified organic, kosher, and vegan-approved, all of which make it that much less appealing. Again, the root beer flavor doesn't come across at all, but that's pretty typical of a lot of natural root beers.

My official review is that Oogave gets 3 (three) IBCs. Unless you're a dirty snaggletooth, i don't think you'll like this that much either. But there is still a market for those people out there who really love this kind of natural stuff. I can respect the fact that they don't want to put processed and chemically altered food into their bodies, but where i think they fall short is by lying to themselves and others by telling them products like this actually tastes just as good or better. You all know someone like this. And whether it's organic soda, or ice cream, or tofu, it's your duty to let them know they are simply wrong. Sorry, but it's true. Really though, I don't think you should bother with this root beer if you come across it.
Posted by My name is Cosmo at 2:51 PM 2 comments: