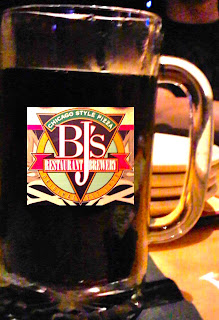 I should have written this review a while ago when i went to dinner with my wife and some friends of ours. BJ's is a restaurant and brewery which brews its own beers. It's a franchise, so there are several of them around, and there is a large dining area as well as a sports bar area for people just looking to try their brews.  It was started in California in 1978, but the food and atmosphere seems to have a Chicago influence (i was probably tipped off by the fact that the BJ's logo says "Chicago style pizza" at the top of it, although i am still keenly observant without that little bit of help). It's not terribly expensive and i think everyone in our group that night really enjoyed their meals. But ultimately, i'm here to talk about the root beer. So let's get to it, shall we?

The root beer was served in a large glass mug, as seen in the picture. Please note, i have taken to editing pictures of root beer where no logo is present to include a logo. This is the case for the picture in this post. I don't know the dimensions of the glass, but i was free refills, so that's kind of irrelevant since once you commit to having root beer with your meal, you swim in it for all the restaurant cares. I like the whole root-beer-in-a-mug experience, but my only complaint is that it wasn't a frosty mug. A minor pleasure i concede, but i like seeing the frost on the mug when it's delivered and all the fun and excitement that accompanies that experience. I believe A&W drive-ins do the frosty mug, but it's been a while since i've been to one. All i will say is that any place that serves root beer in a mug that isn't frosty should reconsider their business model. Put the fact that it's in a frosty mug on the menu and i guarantee sales will increase exponentially (*note* all guarantees expressed in this blog are opinion based only and cannot be relied upon for future business projections whatsoever). I won't comment on the BJ's logo except to say it's fine just fine. It's technically the logo for the restaurant anyway, not the root beer, and what do i care about restaurant logos, right?

So is this handcrafted root beer worth the $2.95 you'll be paying for a bottomless mug of it? I would say go ahead and get it. I don't know that the root beer alone is good enough to draw me to the restaurant, but it is very good, and the food is great too so you really can't lose. It could have used a little more carbonation, but other than that i was impressed with what the BJ's crew could throw together. It was sweet, creamy, and had a good vanilla and root beer flavor to it. My guess is that putting ice cream in it would be an excellent decision. I don't know that the root beer had as much of a Chicago influence as the food and atmosphere, but the only other Chicago style root beer i can compare it to is Goose Island, which was also very enjoyable. Oh, and i guess Berghoff also, but i find this stuff much better than Berghoff. Ultimately though, i think Chicago may be on to something with the way the citizens craft root beer.

My official review is that BJ's gets 7 (seven) IBCs. I was impressed with it. Add a touch more carbonation and put it in a frosty mug and i think you've got a real winner there. There are a few BJ's locations here in the Valley of the Sun and several littered around California i know, but you'll have to check out their website to see if there is a BJ's near you. If so, take and evening and go enjoy some good food with some good root beer. I don't think you'll be disappointed.
Posted by My name is Cosmo at 6:39 PM 1 comment: