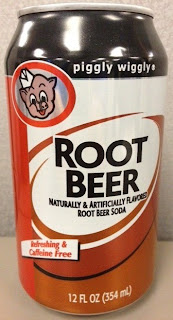 The last generic root beer i currently have is this; the Piggly Wiggly Root Beer. I have often heard of this little store called Piggly Wiggly, but never visited one until my last trip driving across the Southern states. Piggly Wiggly is a grocery store chain started in Memphis, TN in 1916 by a guy named Clarance Saunders. They give this guy a lot of credit for creating the whole concept of a self-service grocery store. Anyway, the chain is very popular in the South and other select areas, but they don't exist out here in the West/Southwest. The one i stopped in was in Georgia in a place called Grovetown outside of Augusta. I was wondering why they called it Piggly Wiggly. I think Richard (my travel companion) said it's cuz they sell every part of the pig there. But the website alludes that there is no real answer and gives a few theories which i guess are generally accepted as truth:

"Saunders' reason for choosing the intriguing name Piggly Wiggly ® remains a mystery; he was curiously reluctant to explain its origin. One story is that he saw from a train window several little pigs struggling to get under a fence, and the rhyming name occurred to him then. Someone once asked him why he had chosen such an unusual name for his organization, and Saunders' reply was, "So people will ask that very question." He wanted and found a name that would be talked about and remembered."

Again, the easiest/most inexpensive way to get this was in a can. Luckily i didn't even have to buy a six pack. The label follows some of the traditions of most generics as far as color scheme and logos are concerned. Honestly, it just looks kind of cheap to me. The Porky-Pig-looking mascot (cleverly dubbed Mr. Pig) kind of throws it off for me. I mean, i know this root beer is not trying to make anyone take it seriously, but the cartoon pig just overstates that in my opinion.

The taste is nearly identical to A&W, another proven generic method to copy such a popular flavor. It has decent carbonation as well. It's not bad. I can't fault it on taste. It will definitely do the job at a hot summer afternoon picnic or in a root beer float. And it's cheaper than A&W, but given the choice i would probably still just spring for the A&W. Don't really know what else to say about it. Maybe just... "meh".

My official review is that Piggly Wiggly Root Beer gets 5 (five) IBCs. This will conclude our tour of generics for the time being. I have a lot more root beers to go through and i just kinda wanted to get these out of the way, sad as it is to say. But that's part of being THE BEST ROOT BEER REVIEWER IN THE WORLD. And in case there is still any confusion, i am talking about myself. You're welcome world.
Posted by My name is Cosmo at 12:30 PM No comments: 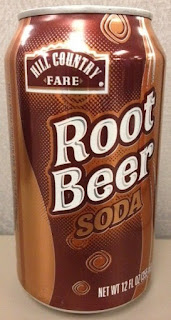 I have a few more canned generics i need to get through, and this is one of the ones i picked up on my cross country drive at the beginning of the year. Hill Country Fare Root Beer is one of the root beers i found in Houston, TX at the local HEB grocery store there. HCF is one of the brands sold by HEB and from what i gather is similar to Kroger in that HCF makes a wide variety of products. Anything from food to personal hygene and more. I guess root beer falls under that wide umbrella. I couldn't find a site for this one, not even a proper page on the HEB website. But it's known that HCF makes more flavors of soda than just root beer. From the can i think it may be made in San Antonio, but that could be completely wrong. No way to tell how long it's been in existance. Really though, it's just another product from a giant faceless corporation, so i can't imagine the backstory is all that interesting.

Like most generics, this one came in a variety of vessels, but i just wanted the cheapest and least space consuming means of transporting this across the country with me. So i sprang for the standard aluminum can. Nothing to say about the label really. Company logo, bland color scheme, big font, you get the point. I don't really mind reviewing generics, but 9 times out of 10 i struggle to find things to say about the labels because they are so bland and formulaic. This is one of those times.

I remember i drank one or two of these at the time i bought them on my trip, but it must have been as unremarkable as now because i have no memory of the experience. This stuff doesn't have a bad taste, but it's quite tame and forgettable. The flavor fades fast and it's a bit watery. It also leaves a bad taste in your mouth afterward. The carbonation seems a little off too, as i expected more than i got. Other than that, it's the stardard root beer flavor, no doubt made from a concentrate syrup bought in bulk. I can't really fault HCF. They are pumping this out in large volume to glean a little off the soda market. However, to HCF's credit the can says if you're not happy with your experience they will "cheerfully refund your money". I doubt i will take those measures as i am not particularly unhappy, just not very impressed.

My official review is that Hill Country Fare gets 3 (three) IBCs. I don't really mean to be harsh on this one because it's ultimately not terrible. But it's definitely on the lower side of the generics, meaning it lacks a lot of flavor and character. Truly, this root beer is adequate and is very inexpensive. But if you invest just a little more money there are a lot better options out there. So if you see this in the store, just get the HEB brand. It's in the same place and gives a greater ROI.
Posted by My name is Cosmo at 8:27 AM No comments: