Hello out there root beer lovers! You will be pleased to know that my much needed free time this summer has been spent hunting down more root beers to review and i currently have a good stash built up. It should last me a while, so don't fret little ones.

This root beer was luckily right here in my own backyard. I made a trip to the Pop Shop just to see if there might be something new, and i found this, JJ Lazlo's Real Draft Root Beer. You may not be able to tell from the picture, but the bottle is bigger than your standard fair. It's the same 22 oz bottle that Sonoran comes in. Coincidence? Not really. The hippie at the counter told me that the guy who brews Sonoran sold the recipe and started JJ Lazlo's, so it's brewed right here in the Valley of the Sun (that's Phoenix and the surrounding suburbs for all of you who may not be familiar). When i talked to Zach, one of the brew masters for Sonoran, he mentioned that they were working on something else. However, the brew master for JJ's is named Scott. Not sure what their relationship is to one another. But i give JJ's some props for their involvement with local schools here. There is a page on their website dedicated to fundraising. You can see pictures of root beer labels drawn by little kids. These labels were put on bottles of root beer and the money earned from the sales went to directly to the school. So that's neat. Well done. JJ's is also looking at making three more flavors of soda, but for now just the root beer is available. You can see details on the website if you really care.

As i already mentioned, the bottle is the same 22 oz bottle that Sonoran comes in. The label for this bottle of JJ Lazlo's was not made by a grade school kid. It looks to have been made on a computer, or at least drawn by hand and then scanned onto a computer and just printed off on sticker paper by any run of the mill ink jet color printer. I'm sure it saves money and i know the guy is just getting it started up, so it may change in the future. The Sonoran label is much more sleek and slick, so maybe it will go that route once Scott gets himself more established. As you can see in the picture, the label features a cool dude with his fedora pulled down low over his eyes. Kinda the old gangster vibe or something. Decent i suppose. I don't have any complaints really.

One of the other things that the hippie in the Pop Shop told me is that since these root beers were made by the same people, that they are almost exactly alike. First of all, my credo is "Nunquam Fides a Hippie", which is latin for, "Never Trust a Hippie". So i decided to put his little theory to the test and taste tested Sonoran and JJ Lazlo's side by side. And as i suspected, that hippie is a filthy liar. It is true they use a lot of the same ingredients (including cane sugar) and both don't have much carbonation, but they taste pretty distinctly different. The JJ Lazlo's label claims a smooth vanilla flavor, but i get more of a honey taste than vanilla, like a lighter version of Thomas Kemper's flavor. Sonoran is more sweet than JJ's, and i still maintain Sonoran tastes like smarties candies. They are both decently good, but taste quite different. One other thing the label of JJ Lazlo's mentions is that it is great over a scoop of ice cream. So my wife and i decided to put that claim to the test also and made a couple root beer floats with this stuff. And it's true, JJ's over ice cream = good, but i think that was mostly due to the ice cream. All in all though, it's a fairly good root beer.

My official review is that JJ Lazlo's gets 6 (six) IBCs. I like that it's made locally and that they work with schools. That's kind of a neat little project, and it indoctrinates kids at a young age of the splendor of root beer. So that's something i can get behind. But ultimately, i think i like Sonoran's flavor more. Just by a little bit though. I still have a hard time getting behind the honey flavor. And it's not over powering, but it's still pretty prominent. So since i gave Sonoran 7 IBCs, it only makes sense to give JJ Lazlo's 6 IBCs. That's still a decent rating though, and i say if you get a chance, grab some of this stuff. It's not bad.
Posted by My name is Cosmo at 8:35 PM 2 comments: 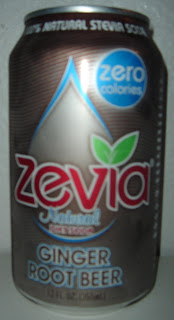 Just a brief update, i've made some good strides in obtaining some new root beers to review now that school is out for the summer and i have more time to devote to this important task. I had to order some online, plan to do some light traveling to a couple states to pick some up personally, and even made a few "deals with the devil", if you will. But the good news is that my supply will increase, which ultimately means that you, my gentile readers, will not have to wander through the root beer wasteland without some much needed guidance.

Anyway, Zevia comes from Seattle, WA and from the best i can gather, it started around 2009. Honestly, this root beer (if you can call it that) wasn't really worth doing all that much research on. Feel free to do it on your own if you really care to. Today's featured root beer was found at the local Whole Foods grocery store, which means it's another one of our wonderful "natural" root beers. Which means it's not good. Which means you shouldn't bother with it. Not much reason to keep reading this review now, is there? My bet is that you will anyway.

I picked up a 6-pack of this soda, which is unfortunate because it ran me about $6. Not the cheapest stuff out there. There are several flavors of Zevia distinguished by the color of the can. The label on each is identical (except for the name of the flavor of course). There is a bit drop of something on the label with a couple little leaves dotting the "i" in Zevia. The wavy parallel lines on the background of the label remind me of Max Headroom, which is either totally awesome or completely lame based upon your childhood memories of the TV show. But other than that, i don't really have much of an opinion about the label. It's fine i suppose. Nothing to write home about though.

Zevia's website focuses largely on educating people what stevia is, which is the plant Zevia gets its sweetener from. As a result, it does not contain sugar OR high fructose corn syrup. If you're truly interested in what stevia is, Zevia has a page on thier site dedicated to the topic. Feel free to browse it for yourself, but since i don't plan to ever drink this crap again, i am going to go ahead and not care what stevia is. Basically, Zevia tastes like nothing with an aftertaste of gross. It largely just tastes like soda water. The gross aftertaste i allude to is likely the crushed hopes and dreams of countless hippies in Seattle congregating to exact revenge on the masses. I don't taste root beer, i don't taste ginger; all i taste is dissatisfaction with my purchase.

My official review is that Zevia gets 2 (two) IBCs. Very disappointing, but then again, i kind of expected it being a natural soda and all. All i can say is that outside of going to school and reviewing root beers, i spend most of my time preparing for the zombie apocalypse, and that entails stocking up on quality root beer. Let's just say Zevia won't be in my bunker with 10 inch thick reinforced concrete walls.
Posted by My name is Cosmo at 11:38 AM 4 comments: