I just realized something that would be kinda cool. In January, the first month of the year, i reviewed one root beer. In February, i reviewed two. So far this month i have reviewed three. Keeping this trend up would be kinda fun, meaning that in April (the fourth month), i would review four, in May five, and so on. However, when you do the math it comes out 78 root beers for the year, and frankly i only have about half that many on hand and don't know if i could make up the difference. Too bad really, that would have been neat, not to mention a personal best for me as far as the year goes.

Anyway, this one comes to me courtesy of my root beer nemesis. He sent this to me in a trade i did with him  long time ago (i want to say at least a year if not longer ago). It's been sitting in my fridge a while and i am trying to get to the ones i've had the longest. Wild Bill's Soda Pop Co. has been around since 2002 and is based in Bernardsville, NJ. They make several flavors of soda, including root beer. The website says that even though the company hasn't been around long, the founder got the recipe from his grandpa who made soda in his basement. Kind of a sketchy statement, but i suppose back then basements were used for wholesome projects and didn't carry the creepy connotations they do with today's grandpas. The company sells all kinds of stuff along with their soda on the website, and apparently they travel to different events all over the nation (but mostly in the southern states from what i can see in their near future).

I like the label, even if it does come on a clear glass bottle (12 oz.) which normally means the soda isn't very good. It is made to look something like an old-westy type wanted sign complete with a couple bullet holes in it (which are see-through, not black). Its a simple plastic sticker applied to the bottle at a jaunty angle, but it carries a lot of character and color (even though it doesn't have many actual colors). The cowboy figure in on horseback pictured on the label is carrying a mug flowing over with beverage. The website has these stainless steel mugs for sale if you care to drink your root beer that way. Personally, i just like drinking straight from the bottle, but to each his own. (Just so you know though, if you don't drink them this way, you're doing it wrong.)

I have to say, this is a pretty good tasting root beer. I am impressed with it. They use natural ingredients, including cane sugar, and have created an enjoyable beverage. It reminds me a little of Napa Valley Root Beer. Just a little though. There is a good root beer flavor from start to finish. My main complaint is that it isn't very carbonated, and i enjoy me some good carbonation. I was going to give it the benefit of the doubt and say that it has been sitting in my fridge so long that maybe it has lost some carbonation, but the website specifically states that these sodas are purposely made with less carbonation than the big names, because that how this soda "is meant to be enjoyed and experienced." I don't quite agree with that, but that doesn't mean it's not a good root beer. It is quite sweet, and my wife says it's a bit too sweet for her tastes. Luckily, as we all know, you aren't here to listen to what my wife has to say. You can just take that as "constructive criticism" if you'd like since what she says, while i appreciate her input, ultimately doesn't matter. Yeah, that's how i run my household.

My official review is that Wild Bill's Root Beer gets 7 (seven) IBCs. It's almost an 8, i enjoyed it that much. But the intentional lack of carbonation just can't put it over the top for me. Overall though, it's still a good root beer. A rating of 7 is nothing to be ashamed of. I'm liking it. Something tells me you will too, carbonated or not.

Oh, and completely unrelated, but just a heads up today people... beware.
Posted by My name is Cosmo at 6:45 PM No comments:

Ok, i feel a little bad that i have been hammering out generic brands lately, and as it turns out i actually have quite a stockpile of root beers to review right now. Therefore, i hope to increase my posting rate over the next couple months and clear some of these out and get to some root beers that are more unique. So breaking from the recent routine, here is a root beer i picked up at BevMo! here in Tempe, AZ. (Just a little inside scoop, my wife pronounces it "beev-moh", where as i prefer to pronounce it correctly and just as it is spelled as any sane person would logically conclude.) So Duh! is made by a brewing company called Hermitage Brewery in San Jose, CA. Hermitage brews beers and sodas on contract for a pub/brewery called Tied House which has been around since 1987. In my limited research i was unable to determine when Hermitage began, but i will go ahead and say it's probably safe to assume it was the same year. The website goes into detail about the process of brewing and bottling, the contests and accolades won, and lots of other info i didn't really care to get into, but you get the idea.
This root beer comes in a traditional 12 oz. dark glass bottle. The label is quite colorful and eye catching. It pictures a dumb looking blond girl with a puzzled look on her face, obviously to play in with the name. Here is a bit of the caption written on the side of the label out of view in the picture. "Duh" means many things to many people... to us, So Duh! means - "Isn't it painfully obvious this is a delicious craft soda made in small batches with quality ingredients & pure cane sugar." [frankly, i think  that was technically a question, so it should be ended with a question mark(?) and not a period (.)]So if anyone asks, "is that soda good?", we hope you'll say DUH! So anyway, there is that cute little anecdote from the people at Hermitage. Overall, i like the label. It's unique and fun.

But as far as taste is concerned, i am not as impressed. The ingredients listed include honey and vanilla, but all i can really taste is a molasses taste that i don't much care for. It also lacked carbonation, but that may just be because it's been sitting in my fridge for about a year now. It reminded me of another root beer that i can't quite pinpoint right now, but it doesn't really matter cuz it wasn't good either. This also leaves a bad taste in my mouth (literally, not metaphorically). Therefore, i deem it not that great.

My official review is that So Duh gets 3 (three) IBCs. Not that much of a fan. I honestly don't hate it and was considering giving it a 4, but the fact that it leaves such a bad taste in your mouth made me give it a 3. Not a fan.
Posted by My name is Cosmo at 11:19 AM 1 comment: 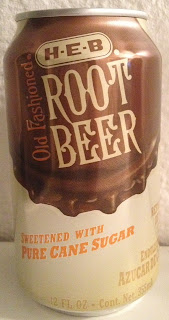 Ok, so i know i just reviewed this generic brand, but it turns out there are two official versions of this generic. And while they are both in fact called HEB "Old Fashioned" Root Beer, the difference is that this one is made with cane sugar. So i am just using the "Old Fashioned" title on this one to distinguish it from the other one. If you haven't read my post on HEB, i'll just fill you in on a few basics (since this won't be much different from the other one). HEB is the name of a grocery store based in Texas and is an acronym for "Here Everything's Better". I picked this one up in Houston on a road trip with my friend Richard. Here is the website.

I enjoy the label on this can better than i did on the bottle of regular HEB. That label just seemed so much more... generic. The same color scheme is used, but this one features a nice root beer bottle cap (something i am a small collector of) with the name of the root beer printed in old timey font. It's much more aesthetically pleasing than the 2 liter label.

I know i am rushing through this, but i feel like it's just a repeat of my last post (which was also very short and bland). I will say that as far as taste is concerned though, i enjoy this one more than the root beer with high fructose corn syrup. I think it has more of an original flavor, in so much as it is not a blatant rip off of A&W. It has a good root beer core with a nice vanilla finish. My wife says she likes the other one better. Either way, they are both good, and to be fair, i only moderately enjoy this one better. No big sweeping difference though.

My official review is that HEB Old Fashioned gets 7 (seven) IBCs. While i do like it more, it's not by much. And while this is an enjoyable root beer, it's definitely not an 8 IBC root beer. Therefore i can rate it no higher or lower than the HEB root beer containing high fructose corn syrup. However, given the choice on the spot, i would choose this one.
Posted by My name is Cosmo at 9:54 PM 1 comment: