I wanted to review this one now for a couple reasons... one, it's been sitting in my fridge for well over a year now. Two, i feel like i have been phoning it in with boring reviews lately cuz i have nothing to say about the root beers i have reviewed lately, but this one comes from a really cool place i will talk about shortly. And three, my wife was supposed to bear our first child two days ago. Sadly, he's turtling and refuses to come out, making my wife increasingly miserable as he's just getting bigger the longer he stays in there. I swear we're going to have to pull him out by his feet while he maintains his kung fu grip on my wife's uterus and fights leaving his now cramped confinement. So what does that have to do with this root beer? Well although it's called Surf City, it is made at a place in Huntington Beach, CA called Brewbakers, and to me, that sounds like Babymakers. It's a stretch, i know, but sometimes my writings are desperate for clever, even poor showings like this one. Anyway, Brewbakers is a cool little spot in Huntington. I learned that they had their own root beer and thought it was a restaurant, but when my wife and i went there with some friends of ours last summer we found that it really wasn't geared toward being a restaurant. They did serve some food items (bread, pizza, pretzels and the like), but what draws customers there is the opportunity to individually brew their own little batches of beer (or root beer) using ingredients and recipes on hand. It was a really neat idea, and had we known we would have booked the time to actually make some Surf City ourselves. I have posted some pictures of the inside of the place, which is quite small but very neat. 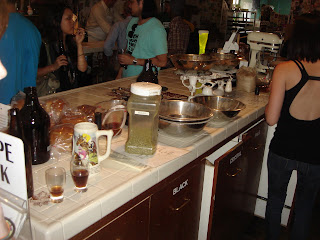 There is basically just a long table in the middle of the room right when you walk in with a lot of bowls and weights and measures on it. Below the table are cabinets with large bins of ingredients; grains, flour, sugar, etc. 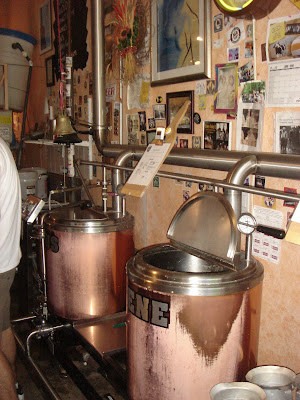 Along the right wall are several small kilns. Not sure if that's what they call them, but it's where the batches are brewed. To the left of of the counter is the cash register and bottles of different brews for sale. I would totally book the time to brew my own batch next time i'm in Huntington cuz it looks like a fun little evening activity to do with friends. As you can see from the pictures, it was pretty packed for how small the place is. Needless to say, this place is pretty popular. 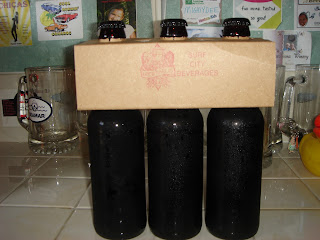 The bottles are dark brown 12 oz. glass with no labels. The label you seen the one in the picture at the top is another one of my hack photoshop jobs. We bought two 3-packs because there were 4 of us and they don't specifically have 6-packs. Regardless, we got what we came for. They do other flavors as well, including a sarsaparilla, but i don't review those even though we did drink a couple. As far as the label i put on there, it's the logo of the soda line they create at Brewbakers. However, the other cool thing about the place is that you can actually design your own labels that go on your brewed batch. So if you decide not to go by a recipe on hand and make your own concoction and want to bottle and label it afterward, they are all set up to allow you to do that. Pretty cool set up. We were impressed.

As far as the taste goes, it's pretty good. It has a really nice aroma when you open the bottle, not much carbonation (although it HAS been sitting in my fridge for a year and i'm not sure the seal on the bottle kept it all in), and it doesn't taste like a cheap generic or a natural brand or anything. It's made with real sugar and is fairly sweet, and i can taste the anise which i don't normally care for but don't mind in this case. It's not an overwhelmingly obvious root beer taste, but it definitely works. By no means bad, and i think had i brewed it myself i would have enjoyed it that much more.

My official review is that Surf City gets 7 (seven) IBCs. I'm not particularly blown away with the taste. It's good, but not outstanding. But i must say most of my rating is applied toward the unique nature of the endeavor and the fact that is can be customizable and changed with each batch based on the taste preferences of the one making it. If you're ever in Huntington, look this place up. I'll definitely book some brew time next time i'm there.
Posted by My name is Cosmo at 6:20 PM 1 comment: 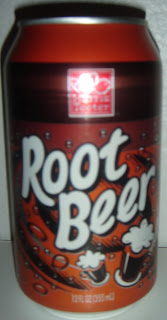 Here's a root beer from the east coast, brought to me by a friend of mine currently residing in North Carolina. Harris Teeter is a grocery store chain in the south east United States, and this is their brand name root beer. There is no site specifically dedicated to the root beer, but here is the website for the grocery store (if any of you really care). I don't really have much to say about this root beer's origins and beginnings, so maybe i will talk about my friend in NC instead. He's a dentist with the navy right now and keeps asking us to fly out there and visit, but we simply reply that for the same price we could fly to Hawaii and stay with my wife's cousin. So basically, he now has to sell us on the idea that NC is better than Hawaii. Granted, i've already been to Hawaii and have never visited NC, but it's still kind of a hard sell. And since he's already scoured the area over there for root beers to send me, that avenue has been closed off. Sorry Richard. Looks like we're gonna save our money. But you're more than welcome to come visit us if you'd like. Except you can't stay with us. We don't have room for you.

This root beer was brought to me in a 12 oz. can, but i am betting you can probably get it in a 2 liter bottle if that's what you prefer. The label is pretty typical for a generic brand; brown color scheme, simple design, lots of bubbles. It has kind of a cartoon quality to it, with pretty below average sketches of root beer mugs. But again, i can't fault them too much for lack of good design since the objective of a generic brand is to make a product as cheaply as possible.

As far as taste is concerned, i again don't have much to say. I'm at the point where i've tasted enough root beers to make it hard to pick out what makes one distinguishable from another unless it's obvious. But as is standard of generics, it tastes like this root beer is copying A&W. Good carbonation, standard taste, typically generic. It's probably really inexpensive though.

My official review is that Harris Teeter gets 5 (five) IBCs. Even though it tastes good, it's so unoriginal that i can't in good conscience give it anything higher than a 5. And again, i don't have much else to say, so i think i'll just leave it at that.