I had a goal of posting at least one review a month this year and i've already failed at that. Last month was a bit of a doozy for me as we sold our house, moved back into our tiny condo we had when we were first married and had no kids, and remodeled said condo all in the span of 45 days. And this month hasn't been much easier as we try and adjust to a smaller home and organize everything while putting on the finishing touches of the remodel. It was not something i would like to ever do again. Lots of long days of work and late nights of remodeling. But the upswing is that we made a decent amount on selling the house and had enough to completely pay off my student loan. So now we are just going to slum it here for a bit while we save up to buy or build a new house in a few years. And hopefully i can still post the rest of the months this year. So i apologize for not posting in a while and for the fact that i need to keep this brief so i can get my kids ready for bed now. This root beer is one i picked up from the Rocket Fizz store. Indian Wells Special Reserve Root Beer is brewed by the Indian Wells Brewing Co. in Inyokern, CA and has been around since 1995. The website on the bottle takes me here, which is very confusing, but a simple Google search for this root beer took me to the correct website. There wasn't much info on the website, including any mention of this root beer though it's the same brewing company that makes Death Valley Root Beer, but i found some info on the bottle about The Indian Wells Spring that served as a watering hole for miners and explorers in the mid 1800's. It serves today as the source of water for this brewing company.

Right off the bat this root beer stuck out to me for a couple reasons. First off, it's in a 22 fl oz bottle, much larger than the typical 12 fl oz. Second, it's sealed with dripped wax for a decorative effect. 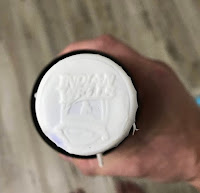 The top of the cap is also imprinted with the logo of the brewing company. So these distinctive features along with the colorful label made this a sure fire pick for me. I like the professional and colorful label. It contains the typical imagery of barrels on an old piece of parchment paper. Lots of different fonts and styles and lots of other superfluous info about the root beer or the brewing company. I give it kudos for the effort on a nice presentation.

The label lists several different flavors present in this root beer recipe, including vanilla, sarsaparilla, birch root, wintergreen, ginger, wild cherry bark, licorice and cane sugar, all aged in barrels made from Quercus Pyrenaica Chestnut wood, whatever that is. So i was expecting to be overwhelmed with flavor. The reality is that i didn't find this root beer all that interesting. It was a bit thin and not even all that sweet. It almost tastes just like sucking on a popsicle stick that never had a popsicle on it. And on top of that underwhelming taste experience, it left a really bad taste in my mouth.

My official review is that Indian Wells Special Reserve Root Beer gets 3 (three) IBCs. I didn't really care for this at all, and i rated it lower than i rated its sister root beer Death Valley, although i really don't remember what Death Valley tastes like except that when i saw they were brewed at the same place i just remembered i didn't care much for Death Valley. Luckily i had my two awful kids to help me drink all 22 fl oz of this stuff, and luckily they are still little enough and dumb enough to realize this stuff isn't that great. They were just happy to have root beer before bedtime. So that part of the experience was a win-win for me, but even though this root beer stands out in the store i will likely pass it by next time i see it and i think you should too.
Posted by My name is Cosmo at 8:44 PM No comments: