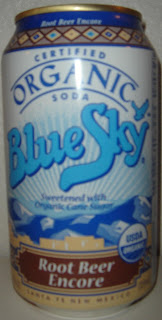 So i just reviewed a Blue Sky root beer, and i am sure some of you are confused. Let me just do a blanket sweep of the formalities and say that Blue Sky Sodas is a Santa Fe, NM based company that started in 1980 and recently moved operations to Southern California. They specialize in making "all natural" sodas. Nothing you didn't already know, right? Well this might be a little different than what you're used to (it certainly was for me). In addition to making "all natural" sodas, Blue Sky makes a line of "organic" sodas. Hence, Blue Sky Root Beer Encore. The difference? On appearances alone most would say nothing, and indeed it seems like this is kinda redundant. But according to the Blue Sky website, the "natural sodas" don't have any artificial ingredients in them, and the "organic sodas" contain organic ingredients? I can't quite make the distinction myself, and if there is a difference in the ingredients, it is quite subtle. I debated a long time in the store as to categorizing this as a diet soda or not. All the evidence points to the fact that this is the diet version of the Blue Sky Creamy Root Beer. But after categorizing what makes a soda "diet" (i.e. an artificial sweetener in place of sugar or high fructose corn syrup) and seeing clearly on the label below the brand name "sweetened with organic cane sugar", i made the professional judgement that this is simply another stab at soda from a company that likes to use organic ingredients. It's not uncommon for root beer companies to make more than one recipe of root beer. So i gave Blue Sky the benefit of the doubt.
The label is basically the same as the cans of the "natural sodas" with two major distinctive differences; 1) the color scheme is a white background, and 2) in big text above the brand name is the Certified Organic Soda seal, proving that this concoction did indeed come directly from Mother Nature. No one is allow to dispute this fact. It's a scientific fact, like gravity and white trash.
But here is where i get down on Blue Sky. Since you're all diligent blog followers, i'm sure you've all read the semi-glowing endorsement i gave Blue Sky for making a decent tasting "natural" root beer. But if their natural root beer is considered an acceptable and generally likable member of the root beer family, then their organic root beer is like the creepy uncle you don't trust around your kids. In other words, Root Beer Encore is bad. The name itself is unfortunate, as it indicates an applause filled clamor for more. But this stuff is just plain gross. Strike one, no (zero) carbonation. What's the point in calling it a soda if it doesn't have carbonation? Just cut to the chase and call it a juice. Strike two, it tastes terrible. The only semblance of root beer i can taste in it is the anise (black licorice) flavoring, which i am already not a huge fan of. I can't taste anything remotely close to organic cane sugar in it. It has the same rotten fruit taste Route 66 root beer has. Strike three, the aftertaste in my mouth could make the Holocaust look like summer camp. It's seriously a huge disservice to the human race. Have some mouthwash handy cuz you're breath is gonna be heinous for the next six to eight hours. In fact, you'd probably be better off just drinking the mouthwash instead of this garbage.

My official review is that Blue Sky Root Beer Encore get 1 (one) IBC. This root beer (if you dare call it that) lies somewhere on the scale between "i hate it" and "i'd rather kill and eat my entire family". To boot, this stuff is expensive. The only good thing i can say to Blue Sky for this is thanks for reminding me why i hate hippies so much (as if i would have forgotten any time soon).
Posted by My name is Cosmo at 7:24 PM