This is a relatively new root beer in the game and is entirely new to me and was acquired on one of my recent trips down to Rocket Fizz. The Ozark Mountain Bottleworks company has a quite modest lineup of classically flavored sodas, including 2 seasonal flavors. One of the flavors on the standard roster is root beer (of course, or why would we even be talking about these guys). The family founded and run company has only been around since 2009 and operates out of Branson, Missouri. Now, i don't know much about Branson except that old people go nuts for it. Apparently there are lots of shows and attractions that specifically appeal to a certain generation of Americans, which in my estimations is fading fast. The only thing i can think to compare it to here locally (we get a lot of "snow birds" in the winter here in the Phoenix area) is a place in Mesa, AZ called Organ Stop Pizza. It is so named because there is a two story parlor room with one wall consisting entirely of a giant pipe organ and all the necessary mechanisms to run it. It is, in the very least, impressive, and at most, an astonishing miracle of modern engineering. 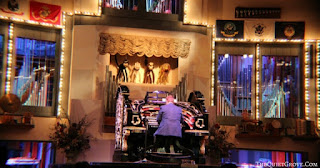 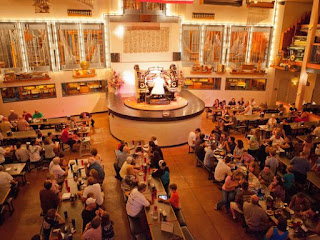 The pizza is laughably overpriced and subpar tasting at best. The running joke among locals is that it's called Organ Stop Pizza because if you eat the pizza it will stop your organs. But on any given night, you can go in this place and find it packed to the brim with table after table of 80+ year old people sitting, eating pizza, and listening to and singing along with the organ player while he plays standards from the All American Songbook, along with some interesting variations of Star Wars, Mission Impossible and other popular movie themes. It is astonishing how popular this place is. Definitely something everyone should experience at least once. My daughter goes crazy every time they raise the little curtain above the organ and she gets to see the little dancing cat marionettes.
Anyway, having never visited or even researched Branson and just knowing the little that i have heard about it, this pizza place is the only thing i can reference which i can think of that directly appeals to octogenarians. Take your grandparents there some time. They are bound to have a good time.

Back to root beer now. This root beer comes in a clear 12 oz. glass bottle. The label is very simple and the same for each of the standard flavors, the only difference being the color of the background. This label is no frills. It's so straight forward that it's practically gay backward (does anyone know what this means? cuz i don't). But despite the extreme minimalism of the label, i actually really quite like it. It seems like it would be on a baseball jersey for a team from the 1920's. They do make a seasonal soda with a tropical fruit flavor called Smugglers Run which has an entirely different label, but the rest follow this same simple format. And hey, if it works then why bother changing it up?

OZMB (the abbreviation used frequently on the website) claims to use natural flavors and real cane sugar with all their sodas. Speaking specifically of the root beer flavor they say this: "It is designed to highlight the classic flavors of Root Beer and Sarsaparilla to create a unique taste unlike anything else on the market." Well, i can't say this tastes like nothing else i've had, but i will say they do a very good job of nailing down the classic flavors of Root Beer and Sarsaparillas. I specifically only review root beers on this blog, but in case i haven't mentioned it before i am still a big fan of Sarsaparilla and Cream Sodas as well. And OZMB does a good job of making a fine tasting root beer. It has a decent bite to it, though the overall flavor is a bit thin tasting. It has a good aroma and decent carbonation as well. Nothing really sets it apart from other root beer flavors for me, but that doesn't mean it's not enjoyable tasting.

My official review is that Ozark Mountain Bottleworks Root Beer gets 6 (six) IBCs. I was on the hairy edge of giving this a 7, but it's just not quite there. It could have a bit more bold taste to it without doing anything to the flavor. But regardless, i did enjoy this one quite a bit and would definitely revisit it. Cuz just like Organ Stop Pizza, the experience is enough to bring you back, even if you are unrepentantly getting gouged on the cost.
Posted by My name is Cosmo at 11:13 PM

I hardly ever see any comments on your posts, but I don't want that fact to discourage you from posting more, so I thought I would chime in. Your blog is hilarious as well as informative, and I love your reviews. Please keep posting until there is not a single un-reviewed root beer out there.

I believe there are millions of root beer drinkers out there reading your posts. They are just not the type to comment. Either they are too busy drinking root beer, or they are in diabetic comas, or they are conspiracy theorists who know when they comment online, "that's how they get ya!" So people are just quietly reading, laughing and enjoying new flavors.

But I wanted to say keep up the good work. Yours is the only opinion I trust, besides my own, on root beer.