Wow... July has been a whirlwind, and all i can really say is that i know i have been missed and i am sorry for delaying my research notes for all of you. But i have a special treat for you today. Sonoran Root Beer is brewed right here in good ol' Phoenix, AZ (specifically, in Scottsdale) at the Pinnacle Peak Patio Steakhouse. I was tipped off by a lady i work with named Merlyn. Suffice it to say, she's awesome. The brewery makes several types of unique beers for the restaurant as well as Sonoran Root Beer. The brewery used to also make another kind of root beer called Watt's root beer which is no longer in production. 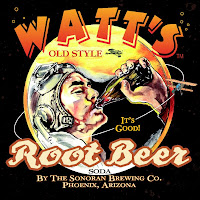 However, i actually talked to Zach, one of the brewmasters at Sonoran (cuz that's the kind of pull i have in the local root beer circles), and he told me that he just recently started rebottling Sonoran and that once he gets this thing going again that he has ideas for lots of other root beer recipes he wants to try out. Nice dude. I only talked to him on the phone, but after talking to him and having never seen him in real life, i'd have to say he probably looks strikingly similar to this. Or this. Or maybe this. Anyway, Sonoran can now be purchased at the Pop Shop as well as from the restaurant where the brewery is located.
Sonoran comes in 22 oz. brown glass bottles, so it's a little bit larger serving than you might be used to. The label feature's a cool, kickin' it cactus with sunglasses and a big mug of root beer. Living in the desert, you get your fair share of exposure to cactus of all temperaments, from happy, to angry, to paranoid. You just gotta roll with it really. But anyway, other than that, the label is quite simple. It uses a lot of bright colors and has the Sonoran Brewing Company brand proudly displayed, so there's really no mistaking it. The big bottle was nice so i could share with my wife, although i don't think she appreciated the root beer much since she was sick at the time. All she kept saying was, "i can't taste anything", at which point she was promptly cut off. So luckily i had plenty left over for the review.
The ingredients listed on the label show that this root beer is quite simple. It tastes like root beer, which is a good thing for a root beer to taste like, and has a blend of other flavors in it. The root beer is made with sonoran desert honey, vanilla, and artificial flavors, but in the end it all just tastes like smarties to me. There was another root beer i reviewed in my what is now ENORMOUS collection of documented root beer explorations, but i can't quite pinpoint which one it is. But the bottom line is that i liked it. It's quite sweet, but still very good. The root beer taste it starts with is kind of overshadowed by the sweet, candy aftertaste, but i didn't find it overpowering or unlikeable.

My official review is that Sonoran Root Beer gets 7 (seven) IBCs. It's a good root beer. I dig the 22 oz. bottles and i am excited to see if Zach follows through with some more concoctions for me to review/promote for him for free. I'm just hoping that once he makes it big, i'll be compensated on the back end. But do yourself a favor and swing by the Pop Shop and grab a bottle. It's decent stuff.
Posted by My name is Cosmo at 3:19 PM No comments: